Q. Your book begins with Earth having been invaded, in fact colonised by an alien civilisation. So first things first, who are the aliens and where did they come from?


The alien race who first colonized Earth are the Siltekans. Throughout the book we learn Earth was being watched, and after The Great War (presumably WWIII) the Siltekans decided the timing was right to swoop in and take control. Earth became one of their many colonies, though because of its beauty was known throughout the universe as their Blue Jewel.
After a generation of colonization, it is clear to the human rebels that the sun is setting on the Siltekan’s empire, but rising for the Devisus. The Devisus are another alien race whose home planet is closer to Earth than Silteka, and naturally the Devisus want to ensure control of Earth doesn’t fall to any other galactic nation but themselves.
The story of The Blue Jewel is set against this classic Thucydides Trap backdrop, but focuses on the plight of the human rebels. Can the rebels succeed in pushing out the Siltekans? What are they to think of the Devisus? Will Earth ever be free?

Q. So we have human culture becoming overwhelmed by dominant alien cultures. Did you draw from any particular period of history for this theme?


Yes, absolutely! History buffs will notice the familiarities to the time period just before the Spanish-American War with the brimming conflict between the Spanish and the Americans, but the story is told from the perspective of the Cuban rebels (the rebels being the Earthlings in my novel).

Q. I notice your wife has done all the illustrations for this novel. How did that come about? Was it a case of her bringing your visualisations to life or did the visual ideas come from her? I guess I’m asking if it was your story influencing her drawings or if the drawings also influenced the story.


My wife Corina created the illustrations after I had completed the first draft of the novel. I love collaborating with my Sweetheart! She has such a gift for bringing out the beauty of her subjects with whatever she creates, and the chapter heading artwork of The Blue Jewel is no exception. One of the themes of the novel is the subtle beauty of humanity, and I feel her illustrations capture the tone of my writing. It really wouldn’t be the same book without the artwork.

Q. This is your first novel. How long did it take to write?


I started The Blue Jewel as a National Novel Writing Month (NaNoWriMo) project in 2017. I completed my goal of 50k words in November of that year, but didn’t reach the end of the story until New Year’s Eve (~80k words at the time). Editing took the lion’s share of the time until “done”. The final draft of The Blue Jewel wasn’t ready until early 2019 - all of 2018 was spent working with beta readers and a fantastic line editor, trudging through many drafts, a bit of wallowing, and finally the polish and illustration incorporation.

Q. There is an element of journey and travel in the novel. Both physically and mentally. Without giving too much away, where is your character headed and why?


The main character Cal is not the typical sci-fi hero. He faces some serious Post-Traumatic Stress Disorder (PTSD) symptoms from his childhood and suffers from extreme anxiety. Early in the novel he is separated from his family and the comfortable life he was accustomed to vanishes. Cal is forced to fight back and overcome his personal trauma to save his family, and over the course of his journey across the Sonoran Desert (Southwest United States - Arizona area) grows into the hero the book deserves.
It was important for me to capture what I find beautiful with humanity, and having a humble hero allowed for some tender moments in the book.

Q. Do you have a particular favourite road movie or book?


I seem to gravitate to this genre of “road” movies or books, but the one I can’t stop thinking about even years after first reading is Zen and the Art of Motorcycle Maintenance, by Robert Pirsig. I love the narrative, and the character transformations, and the fresh moments of self-discovery. It just feels so human, and looking back was a big source of inspiration for The Blue Jewel.

Q. What early memories do you have of becoming a fan of science fiction?


I remember wearing out our VHS copy of Star Wars: A New Hope as a kid from watching it so much. That was a sad day when it wouldn’t play anymore. At night as a kid I would sneak out of my room and convince my mom to let me watch Star Trek: The Next Generation with her after bedtime. I loved the stories, the exploration, and the bravery too. I always admired the heroes.

Q. Lastly, as a real life aerospace engineer, what can you tell us about your job? Are there any fictional sci-fi engineers whose brain’s you’d like to pick?


I think the biggest difference between engineers in movies and books vs. real life is the aspect of teamwork. Nothing complex is ever created by one individual - real life stuff takes scores of people working together as a team. The idea that one person could design the Death Star, or keep the Enterprise running, or build an Iron Man suit is just baloney.
That said, I’d geek out to spend an afternoon with Geordi La Forge from Star Trek. Even though he never had the solution at the beginning of the episode, Geordi never gave up and kept learning and experimenting and discovering until he had the problem whipped 50 minutes later. I admire his grit.

Q. Okay, just one extra question. Your book is available on the kindle. Do you have any plans to release it in paperback?


Not at this time. I think we would try for an audio book before we self-published paperback simply due to the costs of printing and other logistics. Digital formats are so easy to make an initial investment and then forever after capitalize without spending additional money - paperback just seems like too much of a gamble for our little book.

You never know what the future will bring. Thanks very much for the interview J.D.

The Blue Jewel is available here from amazon. For more information, check out J.D’s webpage here. 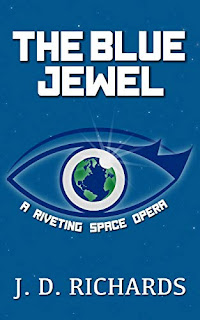