Q. Your short story The Roots of Benevolence (great story by the way!) has been nominated for a Pushcart Prize. Am I right in saying that this is the fifth time you’ve been nominated?

A: Thanks so much! Yes, this is my fifth nomination. I had three nominations this year, one in 2015 and one in 2016. It’s an honour to be nominated, and I am very grateful. The Pushcart is small press, not big bucks. It’s the skinny street urchin who thumbs her nose at the fat, rich banker.

Q. You’ve had quite a successful career as a writer so far. How about taking us back to the beginning: how did it all start?

A: Well, my father was a writer, and my mother was a liar, so I grew up with stories.

I didn’t begin writing much myself, until about 2002. I was working as the Art & Science Director of Esperanza, a non-profit in LA. I suck at discipline. So, when I taught the art classes, I’d keep the kids quiet by telling them stories. One of these grew into my first children’s book, The Adventures of Emily Finfeather about a little girl who could manipulate dreams. I told the children many tales I later published.

Then I was bit by an idea about a Zagat Guide to the Afterlife which was published as a story and grew into a novel.

I’ve been very fortunate in working with publishers, but I’ve had nothing but grief with agents.

Q. Is it true that you met Ray Bradbury?

A: Yes – more than that. He was my mentor and second father.

He once said to me, “I am your rabbi and your priest, this is your temple, now go write!”

One of my earliest memories is of sitting on the steps into my parents’ living room and listening to the authors in my dad’s writers group read aloud from their latest works.

My father, Dolph Sharp, was born in Long Island N.Y. As a young man, he wrote reviews and satirical shorts for a Hempstead, Long Island paper, later moving to Tucson and then to California. Daddy made his living writing fiction for magazines like Colliers, The Saturday Evening Post and Women’s Day.

One of his works, “The Tragedy in Jancie Brierman’s Life,” was published in The Best American Short Stories of 1948. Having just moved to California for his health he was looking for literary companionship. Searching through the Table of Contents, he called all the writers living in Los Angeles.

Not long after, Ray Bradbury, Sanora Babb, Wilma Shore, Joseph Petracca, Elliott Grennard and Ben Maddow met, along with my father, each week, at Canters Deli. Over pastrami on rye with pickles and sauerkraut, they shared stories. My mother offered to pick up the deli supplies and host the meetings at our home in the Hollywood Hills. And so, for over 30 years, they came to Blair Drive. There were drinks and smokes and laughter…always laughter.

These were the best of times. The group formed in the 1940s and lasted all the way to the late 1970s when my father became too ill to host.

My father wrote a number of short parodies, “I’m OK you’re not so Hot,” and Ludwig Von Wolfgang Vulture.” When I began to write, long after my father’s death, Ray became my mentor.

He loved The Adventures of Emily Finfeather, because it deals with an outcast… Ray himself was such an outcast. When he was eight, his classmates mocked him for collecting Buck Rodger’s comic books. To be accepted, Ray burned the books. Afterwards, he became depressed and wondered why. Then it dawned on him… it was because he had burned Buck!

“These people were not my friends,” he said. “My friends would not have told me to burn Buck!” (Later, Ray would have much more to say about the burning of books, but that is another story. Though I have a letter he sent to my father saying he thought Fahrenheit 451 would, “make more of a splash.”)

Ray determined never again to let other people influence him or his work. Being true to your own voice and following your own star was Ray’s recipe for writers. Every time he saw me, he demanded, “Are you writing every day, Evie?” and I knew I had always better say yes.

A: Haha. Well, it’s a word I invented for reading funny flash shorts. They don’t have to be funny, but I do like hearing an audience laugh, and many literary readings are stiff and not fun.

Q. One of your most famous books is Dirk Quigby's Guide to the Afterlife. How about a quick introduction to this, and of where the idea came from?

A: I first got the idea of a Zagat guide to the Afterlife, with ratings for food, drink, entry requirements and music.

My hapless hero Dirk is an unfulfilled adman who thinks there must be more to life than life. So, he takes a class in religion and the afterlife. Turn out it’s taught by Lucifer. The devil is unhappy. Hell is overcrowded. “What with overpopulation and global warming, Hell compares very favourably to New York or Tokyo on a hot day.”

So, Lucifer hires Dirk Quigby to pen a travel guide enticing travelers to different afterlives: Hindu, Catholic, Protestant (that one's got a lot of subdivisions), Scientology, and more.

Instead of writing a boffo best seller, Dirk unites all religions in a common goal: Kill Dirk.

I first wrote this as a short story. It was included in the anthology, “Next Stop Hollywood, Short stories that ought to be movies,” by Saint Martin’s Press.

But there’s only so many religions you can ridicule in a short, and so I extended it into a book.

Q. I’m assuming there was a lot of research involved?

Q. Have you ever made up your own religion for a story?

A: Interesting question. Yes. I made up a religion that takes place after the apocalypse. The survivors worship old stone monuments they find.

I have more than a few tales where society is formed around survival. So they have chants and ceremonies which take the place of religion.

Q. Another of your novels is Electric Detective which is part 1 of a series. I know a lot of your readers are asking – when is the next Eddie Evers book coming out?

A: Soon! This year! Feral Cat Publishing is issuing a gorgeous new edition of Electric Detective, shortly followed by the sequel, The Hollywood Portal.

The Electric Detective series is my attempt to marry Raymond Chandler and Philip K. Dick.

My hero, Eddie Evers was at the top of his game, but after his wife and child are killed in a car crash, he leaves the force and becomes a hard-drinking PI. While in pursuit of a phantom criminal, he’s hit by lightning, super-charging the biophotons in his brain, enabling him to see into other dimensions and experience electricity in a whole new light.

In The Hollywood Portal Book II: Celebrities attending an open house at a Hollywood Hill mansion disappear, leaving only their shadows scorched on the lawn. Only Eddy can see the missing. Haunted by his nemesis Connor Barlow, and aided by his dead wife, child, and a savant cat, Max, Eddy uses his eclectic, electric talents to find the missing and prevent more disappearances.

Q. Getting back to your short stories, I was interested to ask if you follow a set pattern when putting together a short? Also, what advice can you give us on how to write a short story?

A: There are many ways to write a story. Sometimes it just bites me in the leg, and I have to write, or it won’t let me go. Sometimes I have an idea – sometimes I have an ending, sometimes I just start writing and let words flow. Usually this doesn’t work as well for writing books, but I did write one that way, Blood Prism, and it might be my favourite.

Not everyone agrees, but I think you must have a beginning, a middle and an ending.

I don’t usually try to define characters on the first attempt, I let them expose themselves, then tweak them in later drafts.

Q. One of your bios describes you as having worked with children in Bosnia, crocodiles in Mexico, frogs in Puerto Rico, egrets in Bali, mushrooms in Montana, archaeologists in Spain, and butterflies in Los Angeles. Sounds like you’ve been quite busy …

A: And I spent the summer snorkelling with Sea Lions in California. Now I’m in Utah doing bird rescue. I hope to spend next winter volunteering on replanting corals in Bonaire. I figure if an opportunity presents itself, take it! If it doesn’t, make one!

Q. You’re also an award-winning painter, so I hear.

A: Yes. Thank you. I started seriously painting in my early 20’s and eventually had to decide between theatre and art. I choose art because it gave me control over my vision. I’ve been fortunate to get some grants and to have had the opportunity to paint murals and show my work internationally.

Q. Okay, last question. As well as a writer, painter, and adventurer, you’re also an environmentalist and I thought it might be interesting to hear your vision of what the future might hold in store for our environment. Also, the cities of the future – how do you picture them?

A: Oh. Well, there’s the world I think we’re heading toward, and the world I hope for. They are not the same.

I picture domes. It seems like we will poison the air and water and probably live on algae we grow in vats. Some algae are very interesting and can become fat, or protein, or carbohydrates depending on how much light they get. The ocean will have a proliferation of Jellyfish. There might be big, huge, enclosed Jeff Bezos type Yachts for the rich. (I have a story- One Million Ways Jeff Bezos Might Die. I’m not sure if I will ever write it, but it gives me delight imagining it.)

I have more than one tale about people evolving into plants. Think about it – plants have been evolving longer than mammals. They can make food out of light. They communicate with pheromones and roots sending nutrients or poisons to where they are needed. Human’s test everything by human intelligence. If a dog designed an intelligence test, it would depend on smell. We’d fail. Birds navigate in ways we can’t comprehend. Octopus can tell everything about you, etc, by a touch.

But – I can hope we will change course and in my last two stories I put forth some ideas, using hagfish slime to collect micro plastics, using live iridescence in solar cells. There are many scientists doing great things… but that’s not where the money goes- no- instead it’s flying out into space. Just when I try to turn my thoughts toward hope, heat killed an estimated 1 billion small sea creatures in the last two weeks. A BILLION! And what do our richest citizens do (besides pay no taxes)? They are producing huge amounts of Co2, pushing to be first ego in outer space. The die off wasn’t even front-page news.

If we are going to survive, we must realize we are a small part of a large system. The only reason we’re important is because we cause so much havoc. I’m not a big fan of our species.

Thanks very much for the interview E. E. King.

Thank you! These are amazing, thought provoking questions. 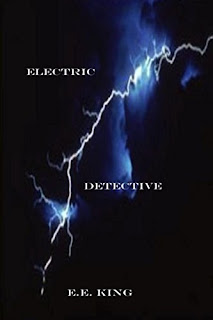 You can check out E. E. King's blog here

connect with her on goodreads here

her wordpress page is here