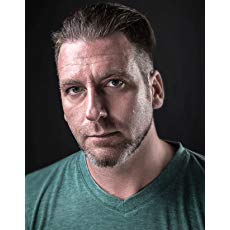 Q. Firstly tell us about your Baelfire book series.

It's a brainchild decades in the making. I started telling stories for as long as I can remember, and originally wrote the story from a different main character's perspective back in 1995. It was terrible.
It was so bad that I actually got discouraged from writing, but continued character and environmental development through drawings.
After a couple of decades, I revisited the work I had, and rewrote the book as it is.
Honestly, I didn't write it thinking about any sort of retail gain, rather, I wrote it because there are so few books in the genre that I felt had a dark reality to them. I liken the work to a Tarantino film crossed with elements of Tolkien: as if reality and fantasy had a love child.

Q. Your first book, ‘Baelfire: Innocence Lost’ has received a lot of positive reviews. Why do you think it appeals to so many people?

Well this is my first book, so I would have to say that my strengths are character development, and dialogue. I think many of my readers find that the content is relatable, rather than being lost in some sort of heavy explanation of objects or details.
I also have been told on many occasions that I have strength in writing female characters, whereas many authors seem to fall victim to clichés and stereotypes. I plan on continuing this standard in future works.

Q. Where did the idea for the Baelfire series come from?

Baelfire, as a whole, is a convoluted metaphor. The "idea" took on a life of its own when I attempted to make sense of the world we live in. Throw in a cuddle puddle of academic study and role playing games, and you have a bit of an idea of where my head was at when I started letting the words appear on screen.

Q. You describe your childhood as having rancher parents, often finding yourself in the dust and mud of small town America. I imagine stories told round a campfire?

My sisters always scared the shit out of me around the campfire, if that's what you mean! For the most part, I had a pretty lonely childhood, worked hard (even as a kid,) and spent a lot of time alone allowing my imagination to take over.

Q. You studied acting and some reviews say your writing is very visual, almost movie-like. Is there a link here?

Probably. I mentioned Tarantino above, and I do have to say that his style of writing has been a heavy influence on me. Going back even further, I'd have to throw a shout out to Shakespeare. Both of these guys have a way of writing for the common man (of the time period,) and I hope I have captured even a fraction of their greatness.

Q. How about the degree in Anthropology. Another influence?

Oh yes. Unlike other degree-seekers, I studied Anthropology to enhance my understanding of the human condition out of pure love for the human condition. Diversity, in my humble opinion, is the key to a successful future for all humanity; one can only hope to understand a portion of this by devoting countless hours studying other cultures. I hope that my writing shows all of these hours of attempted understanding...maybe even to influence someone to do the same.

Q. You came up with the quote: ‘Science is both a liberator and destroyer.’ Can you expand on this?

I could, but it would be a spoiler...

Q. Often artists see and experience the world in a different way to most. How about you?

That's a million-dollar question! I think as an artist, it really is important to recognise that everyone sees the world differently. That's truly the beauty of art. When one makes art with words, you have the amazing ability to allow another to connect the dots and create their own paintings.
I know that I see the world differently than most, and I do want to be able to share that vision, while walking the peripheral safety net-free tightrope of reader interpretation. For example: I love asking people how they see the huge beasts the Plainsmen call "Toenuk." I've heard a hundred different interpretations, and not many match my own vision. It always makes me smile.

Q. There was quite a gap between the release of book one and book 2. How long does it take you to write a novel? Take us through your writing process.

Life stuff is funny. I really do hope to one day become noticed enough to write Baelfire (and other titles I'm working) full time. As it sits however, my responsibilities are pretty overwhelming. I do a lot of work ghost writing for fitness and nutrition, so admittedly, I spend a lot of my creative fuel paying the bills.
If I did the math, it takes me an average of 15 years to write a book...even though my outline is mapped out for 9. I realize I'm an author, not a mathematician, but I am definitely going to have to figure out a way to speed that up!

Q. Are you working on the next book in the series now?

A: I am, and it is nearly complete. 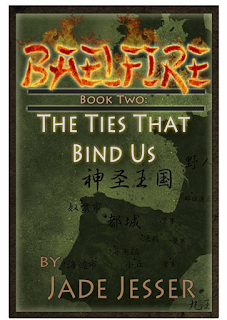 Okay, thanks for the interview.
You can purchase the Balfire books from amazon via the link here.
Connect with Jade via Facebook here.
and follow him on instagram here.