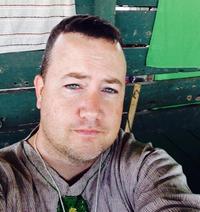 Joint Task Force 13 is a shared universe based on historical operations by US Military units fighting supernatural forces on the battlefield.

Q. The first JTF13 book (Origins: A Joint Task Force 13 Anthology) has already been released and is doing well. Gives us a quick summary of the stories in this anthology.

“Devils and Dust” by two time Dragon finalist J.F. Holmes takes place in the Syrian Civil War, 2018. A JTF squad sent to take out a terrorist dabbling in the supernatural finds that they're up against an ancient god determined to walk the earth again.

“Redeye” by Dan Humphreys follows a pair of military contractors as they fly home from a job in the Middle East. Unknown to the two ex-Rangers, onboard is necromancer intent on getting a foothold in the United States.

“Revolution” by Lucas Marcum. Outside Valley Forge in the brutal winter of 1777, American Marines and British Redcoats team up to defeat an Old World threat that has beenleaving soldiers of both sides drained of blood and lifeless in the snow.

“Run through the Jungle” by Lloyd Behm II. A French plantation owner turns to the supernatural to punish all sides in the Vietnam War, dragging the men of Task Force 13 into a vicious battle with the undead.

“Spy vs. Spy” by Michael Morton. In the opening moves of the Pacific War, an American detachment takes on a Japanese intelligence officer in the Philippines who using supernatural powers to run a spy network.

“Devil Dogs” by Chris Bast. A young Marine in the mountains of Afghanistan beholds the horrors of hell as his platoon is overrun by demons, and his desire for revenge drives him to accompany a JTF 13 squad as they hunt the demons’ master.

“Troll” by J.F. Holmes. A squad from the 82nd Airborne is wiped out trying to destroy a bridge behind enemy lines on June 6th, 1944, and the Task Force is called in to deal with the ancient enemy hiding beneath it.

Q. How many of the JTF13 books will be novels and how many will be anthologies?

We may do an anthology again in the future, but our plans are for five or six novels next year.

Q. How many of the novels do you have so far? I’m assuming you’re still looking for more authors?

Ten are supposedly in the works, but I expect five to actually happen with the year. Yes, of course, absolutely!

Q. Will the novels be released in chronological order?

No, they skip back and forth through history and are, for the most part, stand alone books. Though there will be an overall plot and tie ins.

Q. Will the invaders/monsters always be coming from the same alien source?

They come from the supernatural world and are native to that regions. For example, Djins in the Middle East and classical Dragons in Europe.

Q. I heard that JTF13 was inspired by true unexplained events in military history. One in particular was giant spiders in Vietnam …?

I can neither confirm nor deny but the story is out there!

Q. Will all of the novels be action/adventure?

Q. I’ve heard rumours of a JTF13 inspired video game. Is this true?

Wouldn’t that be freaking awesome?

Q. Okay, a bit about your background. You’re the creator of Cannon Books Publishing and have twice been a finalist for the prestigious Dragon Awards.

Well, one day about seven years ago I was watching an episode of The Walking Dead, doing the military thing and commenting on what utter bullsh*t the firearms and tactics were. My wife dared me to do better, and Even Zombie Killers Get The Blues was born. That was seventeen books and hundreds of thousands of words ago.

I started Cannon because I want to help out writers who are just getting started and have potential. That and make money, but I wanted to see more of the kinds of military Sci-Fi and Fantasy books I grew up reading.

Q. In a previous incarnation you were a military officer and trainer. So for this last question, how about a quick pep talk for our readers (many of whom are writers too).

1. Don’t stop writing.
2. Be open to criticism. My grammar on my first book was horrible, to the point where my wife refused to read it. The odds are a million to one that you wrote the perfect book, and writing is a trade that you can only get better at.
3. Don’t quit your day job expecting to be an overnight smash. It might happen, but probably not. Writing is a job like any other, and it takes hard work, but you can do it.

Q. Great stuff. And the next JTF13 book? What’s the title and when will it be out?

Widowmakers, coming out probably in February 2020. Written by William Roberts, an Air Force veteran, his heroes have to deal with a major gremlin threat to the Army Air Force night attack fighters in France, 1944.

Outside of JTF, Lucas Marcum’s follow up to his smash debut novel Valkyrie is out. Valkyrie: Rebellion is going gang busters too. 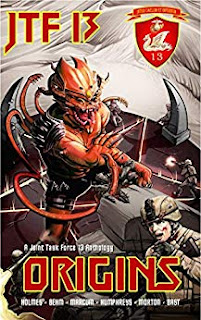 Okay, thanks John.
You can check out John’s amazon page here.
Connect with him on goodreads here.
And take a look at the JTF13 Anthology here.
You can also contact John through the Cannon Books website here.