Andrew Bannister has been making waves this year with his Spin Trilogy books. Here's the first of them. 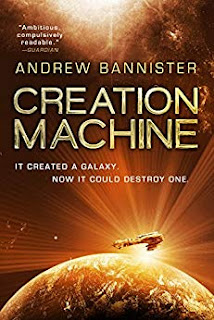 Creation Machine is a fast-paced, whip-smart science fiction debut from Andrew Bannister introducing the stunning galaxy called the Spin.
In the vast, artificial galaxy called the Spin, a rebellion has been crushed.
Viklun Hass is eliminating all remnants of the opposition. Starting with his daughter.
But Fleare Hass has had time to plan her next move from exile to the very frontiers of a new war.
For hundreds of millions of years, the planets and stars of the Spin have been the only testament to the god-like engineers that created them. Now, beneath the surface of a ruined planet, one of their machines has been found.