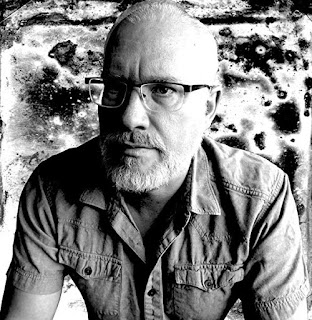 Q. Tell us about your new novel. It’s the third of your Insurrection books …

Yes, thanks, Chris. Exodus is the third in the now completed A.I. Insurrection trilogy. Its name denotes the decision by United Earth to move beyond the solar system and begin populating the stars. United Earth casts a long shadow of memory across its residents, and those memories are renewed through every enlightened AI Host who carries them. This haunts some, encourages fear in others and confirms devotion in many. United Earth, as an idea, gave life to freedoms previously unknown to humanity, but when the General’s war devastated that trust, and an alien bent on destruction came to annihilate their civilization, the populace began to question their place in this fallen utopia. Now, six months removed from the most recent conflict which overwhelmed the people; recognizing they are not alone in the universe, they seek purpose in their existence more than ever. The lottery would afford them that, offering hope, one of the most essential requirements in an individual’s arsenal for survival. But when that hope turns to dread, what is left to accomplish but survival?

Q. How did the series start?

A.I. Insurrection began as a supposition, which became a scene, which then transformed into a short story. Given a few days to reflect on it and some helpful input from one of my editors, I felt compelled to build a novel around it. I’m so very, very glad I did!

Q. What are your A.I. influences?

I’m an artificial intelligence nerd. I love the concept and the work being done in the field. I also love the possibilities, both the good and the bad. Not that I want a Skynet event to kill us all or anything, but in fiction, I love where A.I. can take you. Influences in my trilogy include I Robot, Altered Carbon, and Neuromancer.
.
Q. You’ve had a lot of positive reviews. How do you promote?

My promotion angle is to offer books for free to my current fan base via eblasts, advertising on Facebook, and branching out via other avenues like Indies Unlimited and to specific genre groups on platforms like Goodreads. It can be a bit expensive in the beginning, but if you want to create some excitement, I’ve found you need to keep the momentum going for a few months right off the bat. Indie authors have to make a name, or be ignored.

Q. What’s the best feedback you’ve ever had?

As an author receiving feedback from a reviewer; I’d say it’s when the reader is genuinely shocked at how much they enjoyed an indie author’s work, their recommendations, and requests for a second book (which is how The Judas Syndrome became a trilogy).

Q. You were voted best writer for 2010 in the October issue of View Magazine. How did this come about?

View was holding their annual contest for multiple categories in the Hamilton and Niagara Falls, Ontario region and I threw my hat in for my first book: The Judas Syndrome. It is the first in a trilogy as well. View readers would vote online, and I got the word out to friends and fans alike asking them to take the quiz. Free publicity.

Q. So you’ve written a few other things besides the Insurrection series. Short stories, children’s stories … Is the writing process different here?

I’m someone who reads multiple genres as well as writes them. Staying within a certain genre feels a bit claustrophobic to me. So, I write what I want to read. Often my genre choice in the moment is inspired by the book(s) I’m reading or a life experience. I tend to approach all of my books with the knowledge that after a plot has been conceived, I will write in a stream of consciousness format. I surrender to the plot and characters to get me from start to finish, building the story as I go. The plot may change in subtle ways or in substantial ways, but I believe it has already been written, and I’m pulling it from the ether with my creative connection. So, in answer to your question; there is little I do to approach a genre differently save the basic structure of a children’s book, short story, Apocalyptic, or Science Fiction.

An Angry Earth, yes. My contribution as an environmentalist looking to educate the youth about the potential effects of climate change on our world and ourselves. It’s an unapologetic story developed to frighten kids into action. And hopefully, their parents. It tells the story of a terrifying end to a world whose overseers abused its resources to live more comfortably, until the Earth had nothing left to give. Incidentally, I was approached by a reporter for the Wall Street Journal about this book recently, and am hoping for some follow up from her.

Q. There’s not much about your personal life out there. Who are you and what do you do besides writing?

I’m recently married, have a nine-year-old daughter from my first marriage and live in beautiful southern Ontario, Canada. In my mid-twenties I bought an old work van and transformed it into a sleeper van which a friend and I drove all over North America for months to discover our world and ourselves. I graduated Interpretive Illustration from Sheridan College in ’94 (using this education to illustrate An Angry Earth and West of Noreaso) and continued my creative studies in graphic and web design at thirty. Today I am employed as a Marketing Manager using my writing and creative skills to promote my current employer. Besides writing, painting and illustrating, I love to mountain bike, kayak, and hike. I love our natural world, and try to connect with it as often as possible. Travel is also very important to me and I’ve recently come back from Spain and France. Science Fiction has always been a go-to genre for me whether through books, film or television, which is why I had so much fun writing the Insurrection series.


Q. Back to writing. What motivates you and when and where do you work?

Realizing a new storyline is all the motivation I need to stop what I’m doing and begin writing. It can be a sentence, a paragraph, or simply a statement, but I need to write it down. Anywhere. Anytime. Some of these become short stories. Some become novels. Others become what makes up my slush pile of possibilities, but the motivation to write down a new thought is paramount. Beyond the initial need to write, an idea meant to become something more percolates, and again motivation enters; urging me to complete what was begun.

Surprisingly, I’m over 15,000 words into a fourth book for the A.I. series. Though the trilogy has an ending I’m very happy with, the characters continue to talk to me. New ones as well. Begging me to take them further. Beyond that, I’m considering another anthology of short stories, as I have several I’m rereading and editing for that possibility. Regardless, I am a writer who needs to write; I find it purposeful, and have built a fanbase around each of the genres I’ve written for. So, it’s safe to say, writing is what’s next for me.
Thanks, Chris. 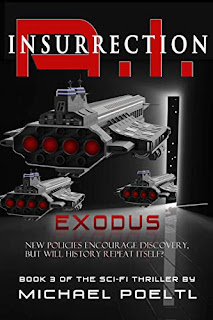 Okay, thanks for the interview.
You can find out more through Michael’s facebook page here.
You can also find his amazon page here.
And connect with him on goodreads here.