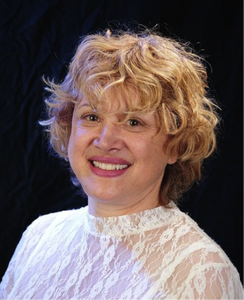 Q. So, you’re an award-winning author. Tell us more.

Yes, thanks, Chris. I belong to a few chapters of Romance Writers of America (RWA), on and off-line. My first career had been basically as an engineer and applied mathematician, so in writing sci-fi novels, I wanted to delve deeply into the psyche of my characters through what Orson Scott Card (of ENDERS GAME fame) says is THIRD PERSON LIMITED DEEP POINT OF VIEW narration. RWA continues to help me to write my social sci-fis (or sci-fi romances (SFRs)) with more depth than we might find in traditional sci-fi thrillers.

Every once in a while, I like to write near contemporaries so I can amplify the relationships between characters (heroes and heroines) rather than getting lost in the science.

Years ago my first contemporary, originally called A PERFECT MATCH, was given The Golden Claddagh Award from the Celtic Hearts on-line chapter of the RWA.
Working it over as a suspense, I renamed it OPEN SEASON on Love and Death (finally out on August 31st of this year, during the U.S. Open Tennis Championships in Flushing Meadows where the story of our future tennis champion takes place).

Q. Your books have been rather successful, sales-wise. What do you do for promotion?

Most indie writers know it is hard to get noticed, even if an author has honed their craft. My first book, an erotic sci-fi horror novella, was published traditionally through Whiskey Creek that was subsequently bought out by Simon & Shuster. Two of my LEGENDS OF THE GOLDENS series were published by SOUL MATE, who from time to time does promotion for its authors. To amplify sales, at the insistence of my SOUL MATE editor, I wrote a novella that I indie-published free through DRAFT2DIGITAL. Amassing a Twitter.com audience using Tweepi.com, I managed to keep my novella in the Amazon top-downloaded for months.

There are so few authors profiting from sales that it only takes the sale of one paperback to propel ones book or author rank to a top ranking for a day (in paranormal romance/SFR). Right now, it is more important for me to get my nonformulaic books out there than to earn profits.

Q. Your book covers seems kind of sexy but there’s also a fair mix of different kinds of sci-fi. What kind of genre writer do you see yourself as?

Q. How do you differ from other sci-fi writers?

I challenge myself to write in the most intimate manner possible through narration from within the character (deep POV).

Being a scientific generalist with advanced degrees, I write hard sci-fi that helps the reader to start asking real questions about space and time instead of using words developed in the mid 20th century as placeholders. For example, instead of using just the word EXPANSION to describe what our universe is doing, I hope to get the reader to think about how space is created and destroyed (the destruction is where the black hole comes in).

Q. You have scientifically published research on fluid-fluid analogue of universal expansion. So for those of us who don’t know, what is this?

In a thin horizontal mould (bordered by glass top and bottom) a water-based viscous fluid droplet is injected into an oil-based outer fluid. As more of the inner fluid is added (at the source) the expanding boundary of the droplet goes from a perfect circle (stable) to an unstable boundary of any number of sine waves (a simple model of how quanta are created).

Though this experiment is low energy, it gives us an idea of how our universe arises as it is. Unless there are changes in potential (coming out of a singularity source), relationships cannot be formed in a permanent manner).

Q. How would you say you differ from other scientists?

Other scientists in this field (using a Hele-Shaw cell (my mould) to force the flow of two viscous fluids together) used higher flow methods that were easier to come by but harder to mathematically simulate/model. I invented a special valve to slice the syrupy/viscous fluids together so that air droplets at the interface between the two fluids would not affect the experimental results.

Many applied mathematicians did not have courses in how to solve for early unstable forces in the universe (using complex numbers and The General Energy Equation)— the beginning of existence of any number of relationships/objects on our expanding universal boundary.

Out of my research, I began to see that objects, anything that exists within the universe, represent relationships across boundaries. This is more of a relational natural philosophy, just another perspective to solve some of the mysteries out there (like bicameral vision (two ways of looking-at/perceiving things) gives us data on depth perception).


Q. Tell us a bit about your life doing forensics on F16s as an aerospace engineer.

Well, it was the beginning of diversification of computers and many different forms of disc operating systems and different Basic languages existed or each system.

I did lots of fractography. When a plane crashes, if a fractographer examines the way an aerospace material breaks, that can us tell us lots about how the part failed.

I created a program that helped me measure the crack growth markers (for example, as a result of the high and low stress imposed by a failure or a test to reproduce the failure). The program was given to those friendly countries who wanted to do their own failure analysis.

I also worked with a composites group, by developing ways of recognizing damage on aircraft skins and load members through the use of a scanning electron microscope (SEM) that appears in my space opera novel SPACE FOR US (coming soon).

Q. I read somewhere on your blog that you’re the mother of one of smartest sons in the world. Do you ever get any ideas from him or run any ideas past him?

We are speaking of a millennial now. And I am his mother!

The most important things I glean from him is his laid back attitude about the world, and yet a powerful empathetic understanding of it. These kids will be my beneficiaries. Our world, whatever we make of it, will be theirs. They see most of the mistakes of the former generations. Things will change. I hope these kids, like my son, figure things out for themselves.

Since I write both NA and YA (young adult) my editor beta reads my work and tells me what I should be writing in the millennial vernacular.

Q. You’ve a couple of books out this year. Tell us about them.

OPEN SEASON on Love and Death: is an NA romantic suspense. Dedicated to my father who was involved in early tennis in the United States, it is about Madison Weller (heroine) who has no mother, but a distant father, who was a successful tennis champion. His indoor tennis center ambitions are a different matter. He forms an alliance with a crooked tennis agent, mother of the hero, the current mens tennis champion. The suspense comes in when chemical forensics is used by NYPD to stop the nefarious ambitions of the sociopathic mother of the hero. Can any number of rain delays and poisonings propel our heroine to the finals?

SPACE FOR US: is an NA, SFR, space opera. The heroine, Jade, looks Asian, but is a descendent of the Sledani aliens who had once gone to the stars in generation ships, and have returned to Earth to retake their planet.

The mind of the first lady is missing. She is in a coma, but it was not Jade (the heroine) who put her there. The president goes nuts and sends Jade out with his black ops squad to rescue a downed pilot, Shepard (the hero). But all that rescuing was a farce, to insert Shepard as a mole on a rebel crew who steals one of the space planes.

If this becomes a series, it will be labeled SQUARE BALLOONS, since the motive forces of the new alien-invented spaceplane (and its AI riding shotgun) is a product of the expansion and contraction of space.

Q. You’ve written so many books. Do you have a particular favourite?

The one I have not written yet. The one I wrote the outline for during the 2018 NANOWRIMO: BAZOOKA TIME MACHINE, starring metallic and wetware androids and aliens, a woman on woman relationship, and written in the first person.

Q. Your books are rich in dialogue. Has this been a conscious decision? And what’s the secret to good dialogue?

As a very young one, I read the plays of Shakespeare and scripts from those on Broadway. Dad, also, encouraged me to recite some Shakespearian soliloquys.

Because of my comfort with dialogue, I write that first (no grammar, just words). Then in layers (through editing) I add the grammar, the tags, and the behavioural beats. I am seriously thinking of downloading at least one novel into a screenplay.

I have to admit, when I started writing, that I spent my time putting in too much background information and narrator intrusion. So I force the extreme of only narrating from within my characters.

Memorize all the rules in the little book, STRUNK AND WHITE: Elements of Style, keep it under your pillow, and practice it profusely. 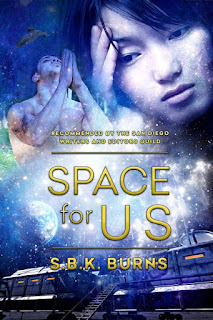 Okay, thanks for the interview.
You can find out more through SBK Burns’ webpage here
where you’ll also find a link to her twitter.
Check out her bibliography on the amazon webpage here
and you can connect with her on goodreads here.