A stylish collection of sci-fi shorts. Well written and easy to read. 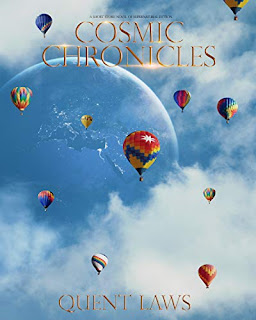 Cosmic Chronicles presents four short supernatural stories that are suspenseful, dramatic and mystical all in one!

Glowing Squares- An urban Chicago youth stumbles across a mysterious pair of dice and realizes that it has a bizarre power.

The Castle of Clues- Pierre Marcos, an arrogant young man from a wealthy background, disrespectfully encounters a strange homeless man and finds himself in a dangerous world of riddle and clues.

Prism- A Portland journalist, Marlin Bryant, is sent to Egypt to cover a story on the pyramids but discovers an ancient object inside that brings about the most pivotal point of his life.

Sapphire City- The result of international nuclear war has rendered the Earth into a wasteland and some humans into mutants. The planet's face is distorted... all except for one place on the top of the globe.