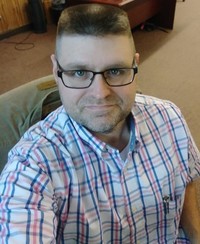 
Q. So to give a brief setup, Ben Corbin and Sam Garrett have woken up in the 28th century after 200 years in stasis. Who are these characters and what is the mission they find themselves having to accept?

Thrust into a new age of engineered soldiers, interplanetary politics, and self-aware robots, Corbin has to quickly decide who he’s going to trust as he journeys back to the Mars colony to find Garrett. The task is to convince their new alien allies of humanity’s worth. What exactly is expected of Corbin though is unclear as the Commonwealth and the aliens both know he’s no diplomat. Corbin isn’t satisfied with the restrictions placed on him and he breaks rank in an attempt to find some closure regarding his dead wife – but his search for truth may come at the cost of his life, and the fate of the Commonwealth may rest on his decision.

Q. I found The Last Marines to be very visual, very fun. Are you influenced more by movies, TV or by books with regards to sci-fi?

As much as I’d like to say books it was really TV and Movies growing up. I’m dyslexic and I hated to read as a child. I slowly came around after my father bought me copies of The Hobbit and The Foundation. I love reading now but it took a long time for me to really enjoy them.

Q. Who do you write for and if you could slip this book onto anyone’s desk, whose would it be?

Adult lovers of Science Fiction, Military Science Fiction, Space Opera, Westerns, Light Horror … If I could slip this book on to anyone’s desk it would have to be Quentin Tarantino. Though I know it would be very different I’d love to see what he would do with it.

Q. I read that you got the idea for The Last Marines while watching another movie …

No not really a movie, though I’m sure the movies I’ve seen over the years have influenced me even in ways I don’t realize. That said, I had actually found myself with let’s say a few “unplanned” days off work and I was catching up on some reading. Sitting in my cliché suburban recliner with a fire burning in the fire place and nothing to distract me from my book. Even still I kept finding myself staring out of the window think of another story. One I wanted to tell, in my own universe with my own characters. The book I was reading wasn’t bad mind you it was good ole’ Space Opera stuff. The hero was very heroic and right and the women swooned. I imagined something a little darker, with flawed diverse characters that made mistakes. Mistakes with real consequences, and casualties. So I put down the book I was reading and started writing.

Q. What has writing this novel taught you and what do you think you may do differently next time?

It taught me that there are many different perspectives you have to consider even when not writing from those perspectives. Hiring good editors and cover designers is important if you want people to pick up your book and keep reading it once they spent their hard-earned money on it. As a writer I hate to say it but marketing is just as important as the writing IF you want to sell books and get them into people’s hands.

Q. Which are the best gadgets/inventions of the sci-fi world you created? Any favourites?

Definitely the gauntlet weapons and living armor that the aliens use. Also the nanotech defensive and offensive systems humans have.

Q. When we read sci-fi, in many respects we are looking for something familiar. Familiar sci-fi I mean. So I wanted to ask, what did you invent and what did you borrow?

I borrowed blasters, anti-gravity vehl. “jetpacks” so to speak, robots, faster than light space travel, creatures of legend, aliens, cyborg prosthetics… because lets face it who doesn’t love a good mil-spec robot arm. What I invented… Living armor, AIs whose consciousness can be installed in a wide variety of enter changeable chassis ranging from a floating gun sentry the size of a basketball to a massive capital ship or installation. Also nanite defensive and offensive weapons for both personal and ship born use. These were original ideas mind you but I’m not swearing none of them were ever thought of by anyone before me in some work of fiction I’m not aware of.

Q. There are quite a few characters in this book. Apart from the main two, are there any other, say minor characters, that you are particularly fond of?

Definitely, Nolan. Partly because the readers love her and partly because of the evolution of the character during my writing process. Now when I started this journey there was a lot I did not know, still is really but I’m working on it. One of the things I’ve learned along the way is don’t interject yourself into the story. Originally Nolan was just a minor one scene character named Ollie… and his wife was named Mandie, after my wife and myself since a part of the original scene is modelled after phone conversations my wife and I have had. So I changed the character’s name for that reason and because I’d decided for story reasons to make the character a disabled veteran. I changed it a couple of times, in fact, before settling on Nolan. Then it was suggested that Nolan would be an even better character as a woman and after considering it for a hot minute I couldn’t for the life of me figured out why I hadn’t I thought of that. Having strong female characters that readers will really enjoy is very important to me. The character works great as a nare do well, inked, pan sexual, female, veteran getting by as best she as a VIP shuttle operator ever since she’d been kicked out of the Fleet Infantry for what amounted to insubordination. Changed Nolan’s wife’s name to Eidnam and haven’t looked back. This character is quickly becoming one of my favourites as I’ve written her into the series as supporting character.

Q. Okay, just to change the topic, you’ve set up quite a successful sci-fi group on facebook (in fact I’m a member myself). Tell us a little about the group and what drove you to create it?

I really wanted a group where experienced writers, new authors and fans of the Science Fiction genre could come together and share ideas, experiences both positive and negative as well as resources with each other. All while networking and promoting their work and mine… The group is growing but I’ve admittedly not given it all the attention I think it deserves to make it what it could be.

Q. I read in another interview that you like to hide secrets in your novels. How about telling us just one?

Sounds interesting. Okay, thanks for the interview, Lawrence.
Check out these links for The Last Marines on amazon here, Lawrence’s blog here and you can connect with him on twitter here and on goodreads here. Also don’t forget to check out the facebook page here. 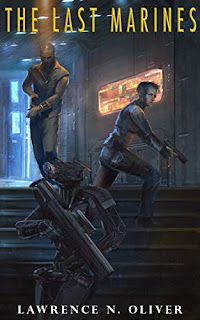