A short novel that moves quickly from a near future metropolis to the wonders held beneath the oceans of Jupiter's Europa. Told in a patiently realistic style, this story is both believable and fun. A ride worth taking. 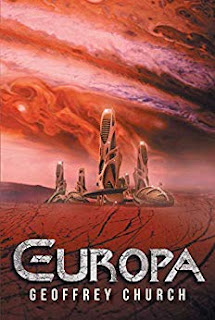 The year is 2068. The United States already has several colonies on the moon, Mars, and Jupiter's beautiful moon, Europa. A vast saltwater ocean has been discovered below the frozen surface of Europa. The president of the United States has approved a special mission to drill through the frozen surface of Europa and deploy a submarine to explore and search for life in Europa's vast subterranean ocean. A team of highly successful business leaders and entrepreneurs finance the adventure, hoping to capitalize on the treasures and resources for the benefit of mankind back on Earth. They encounter a truly amazing world, with many similarities to our own planet, not to mention a breath taking landscape.
- September 14, 2019