It's gritty, it's British, it's Cyberpunk. 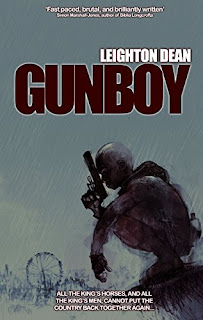 Since 2018 England has been cut in two. The government rules from York, while the South has fallen to ANARCHY.In 2038; Evan Bell finds opportunity to unite the kingdom - an emergent leader within London’s gangs, wants to talk. But when a medical transport is shot down, violence errupts in the city. His mission doomed, Evan finds hope in an unlikely ally: Bo, a 13 year old assassin.Chief Whip Oliver Trench uncovers a corporate plot looking to usurp the Prime Minister, one which will test his loyalties between his friend, the PM and his country.Evan and Oliver must navigate the war torn streets of London, the unravelling of Britain’s government and a shadowy corporation’s play for dominance. The odds are against them, but in London - a child is about to make a difference.