This month's featured book is the second novel by Varun Sayal. A lovingly written belter of a book. 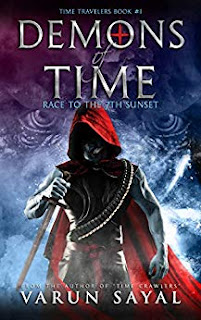 A time traveling hero armed with a necromancy spell, travels five thousand years into the future, chasing a demon from his past. His mission was to prevent an apocalypse, but all he cares for is revenge.

3077 BC. Ancient India. A young child Tej and his mother were rescued from the atrocities of Kumbh, a demon of time. Their savior Rigu, a well-known sage, captured Kumbh inside a time-prison. Twenty years later, Tej's scars have healed, but the fire of revenge burns inside him, unabated.
Rigu reveals to Tej that Kumbh has escaped his time-prison and plans to decimate human life on a global scale. Tej has a chance to satiate his thirst for vengeance, but he must travel five thousand years into the future to the year 2024 AD and re-capture the demon. He races against time as he has only seven days, after which Kumbh will be invincible.