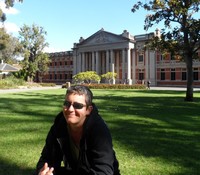 
Q. You’ve just released book 4 in your Cortii series. For those of us who don’t know, who are the Cortii?

The Cortii are a mercenary organisation of genetically-engineered humanoids. They aren’t the only mercenary units for hire in human-governed space, but much to the annoyance of the governments and the other mercenary units, the Cortii are both the most expensive and the most effective. They work from space-capable Bases situated across humanoid space. These Bases, also much to the annoyance of various governments, are hard targets to the point where no Base has been successfully attacked in recorded history.

Q. So for a bit more information, I’m interested in what they look like. Also, if they are based on any similar types from human history.

Historically, Cortiians were fully human – more of a militant cult than anything else, pre-spaceflight. They colonised the galaxy along with the initial human colonisation waves, but, like a lot of spacers, found that a little genetic modification made life in space a whole lot easier. However, unlike most humans, the Cortii didn’t stop at being able to tolerate a lower-oxygen atmosphere and other minor tweaks: Cortiian scientists went on experimenting to improve bone and muscle density, range of telepathy and empathy, eyesight, hearing... Which was fortunate for the Cortii, since about the time the majority humanoid government of the time declared them outlaw, they passed all the markers to become their own subspecies, with their own citizenship.


If you met a Cortiian on the high street, you wouldn’t notice them; they specialise in undercover work, and can alter their appearances very effectively. Undisguised, they’re on the tall end of average, about six feet; skin colour varies, but has a coppery tone in most cases that adapts easily to high-UV environments; you’d notice higher than average cheekbones, which support larger sinuses. They’re mostly lean rather than bulky, and if startled (good luck taking a Cortiian by surprise), you might see them move quite a lot faster than average.

Q. There’s a lot of action and adventure in these books. How do you decide on the balance between making the prose exciting and punchy while also taking time to fully describe the world you have created?

Confession: I’m an inveterate pantser, so the plot to background balance is less conscious decision on my part than it is reading through at the editing stage and tweaking anything that makes me wince. While I do have formal editing training and experience (lucky me, it saves me a mint), it’s been more focussed on copy and proof than developmental. If something sounds clunky when I re-read, or if it doesn’t provably move the plot along or add anything else vital to the book, I alter it or axe it.

Q. Do you base your characters on real people? On yourself? Characters from other stories? Stereotypes?

Quite honestly, I think that every writer bases characters to some extent on personas they’ve met or read about; I read once that all the faces you see in dreams are faces you’ve seen, sometime in your life, even though you don’t actively remember them, and I strongly suspect that outside influences in my characters do occur, and to much the same extent.

Q. Out of the four Cortii novels, I’m interested if you have a particular favourite action sequence or scene?

We’d be here a while. Getting to sit on the shoulder of a career mercenary is one of the main perks of writing, for me. Some of the space chases come to mind – there’s one in particular, in the draft of book 7, that gave me happy spasms of glee writing it. Some of the dialogue, as well, if I’m being honest, is a lot of fun to write. Cortiians aren’t particularly nice people, and they’re quite happy to stab opponents in the back, literally or metaphorically.

Q. When writing a series such as this, do you have to re-read your novels before starting on the next one?

Yes and no. I’m lucky, I’ve been telling myself stories in the Cortiian universe since I was about five, so most of the world is internalised to the point where I don’t have to spend time agonising about culture and history and writing myself post-it notes. I find the start of a new book is the tricky bit, at least in my head, and that’s when I tend to find myself re-reading previous books to reassure myself that character A hasn’t completely shifted between books. So far, it’s been paranoia.


On the other hand, I do also re-read my books for fun, immodest as that sounds – there are times when only my own writing tells quite the story I’m in the mood to read.

Q. Have you ever been tempted to go back and change something in a previous novel?

I’ve been known on occasion to go back and cut a section in a published book. Through the Hostage is the principal culprit for this: it was the first book I published, and I made the classic newbie mistake of leaving stuff in because I liked it. A couple of years and three books later, I went back with a machete and took out some of the unnecessary bits. Other than that, I’m currently working on a box set of the first four books plus Unaltered, and I’m updating the formatting for consistency across the whole series. I hope that’s going to be the last time, because formatting seems to require a lot of beer.

Q. Okay, a bit more about you. I see from your blog that you’ve moved around a lot, living in England, Canada, travelling around southern Europe and the Caribbean as a kid. Did this open your eyes to the world? A good experience?

I love seeing new places. I can’t afford to do it as much as I’d like, but one of the gifts from my nomadic childhood is adaptability to new places and ways of living, and seeing how other people live fascinates me. And then those experiences probably get fed into my books in some form or other. The downside was going into a UK boarding school in my teens after years on a yacht in the Caribbean and elsewhere and having basically nothing in common with my year-mates. That left me with an inbuilt wariness meeting new people, especially around the ‘so where do you come from?’ questions.

Q. You once tried to join the navy. How far did you get? Did this experience influence the military aspect of your writing?

I took my Boards for officer training, but was in the majority that fail the first time through. The Captain in charge of my Boards was nothing but supportive to my trying again after university, even to personally writing to me to encourage me to do so, but in university I met my partner, and it didn’t seem fair to start a career where I’d be gone nine months in twelve, so I withdrew my application. I wouldn’t say I ever got far enough with the Navy for it to influence my writing. I do still regret my decision to pull out of that opportunity, although it was for what seemed like good reasons at the time.

Q. Do you think you will always exclusively be a sci-fi writer or do you have your mind on other genres for future projects?

I brought out an urban fantasy novel partly based on my time in the Caribbean at the end of 2018 (Death is for the Living), and I’ve got another couple of urban fantasy ideas in various stages of draft, but honestly sci-fi is probably always going to be my preferred genre. There’s just something about travel to strange new worlds and figuring out that universe that makes me happy.

Q. And how about the Cortii? Is this the last we’ve heard from them?

Oh, definitely not. I’ve got everything up to part of book 8 in drafts, and frankly even that one doesn’t feel like a series wrap, so I suspect there’s going to be more. Lots more. Plus, one of my secondary characters from Fighting Shadows just demanded a novella of his own, Unaltered, so there’s a strong possibility if he gets pushy enough that there’ll be a novel on his storyline as well at some point.

So definitely not then! Thanks for the interview, J. C.


You can check out more interviews with authors on J C’s own blog here. You can find his amazon page here and connect with him on goodreads here. 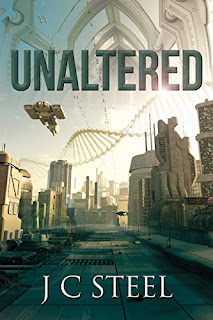